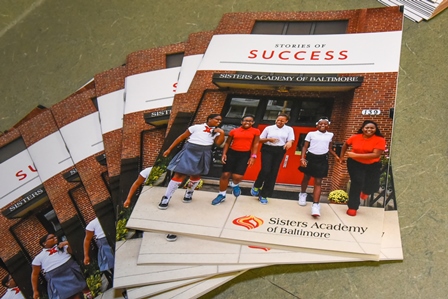 The idea for our school began when a small group of educators, community leaders, and parents came together to talk about the power of education to transform blighted neighborhoods in southwest Baltimore. In August 2002, four religious congregations: the School Sisters of Notre Dame, Sisters of Bon Secours, Sisters of Mercy, and Sisters of Notre Dame de Namur, decided to conduct a school feasibility study that would involve reviewing demographic data of census tracts in southwest Baltimore, conducting focus groups with parents in the area, and interviewing neighborhood organizations. During this process, parents and community leaders pointed to a critical need for intervention in the lives of their middle school children.

By June 2003, all four congregations had committed to working together to create a new middle school for girls. The school opened on September 7, 2004 with the fifth grade. For the next three years, we added a new grade each fall. For the 2007-2008 school year, we enrolled students in all four grades – 5th, 6th, 7th, and 8th – for the first time. Our first class of eighth graders graduated from Sisters Academy on June 4, 2008, completing the four-year foundational phase of the school.

Sisters Academy of Baltimore received its Certificate of Approval as a middle school for grades 5, 6, 7, and 8 from the Maryland State Department of Education in November, 2007. In the Spring of 2015, the school became a full member of the Association of Independent Maryland & DC Schools (AIMS) and received accreditation by that organization through 2026.